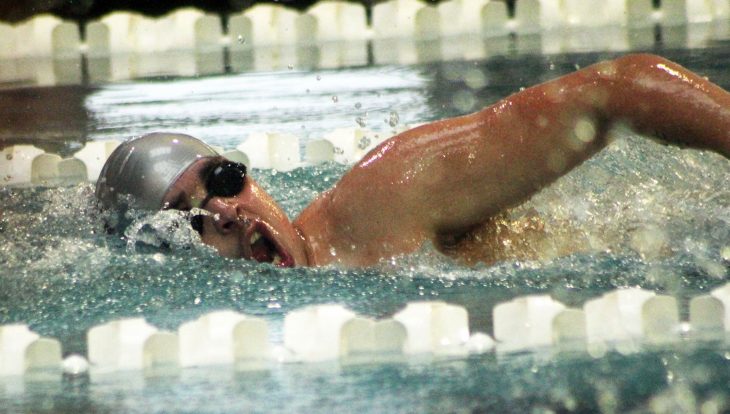 The last thing most people think of in the dead of winter is swimming; but, for the War Hawk swim team, it means just that. Starting back in late October, the men and women’s teams have been competing non-stop. Facing off against Austin College for their first meet the War Hawks fell behind in the end. For their next two meets, the War Hawks faced several schools at Hendrix College. The McMurry swim team participated in several more meets and invitationals throughout the 2018 season.

The biggest meet so far for the War Hawk swim team has been the Colorado College Invitational, with additional challenges such as altitude, distance from home, and the lower temperature. It is no wonder this meet is one of the biggest for McMurry’s swim team. This meet was the last of the regular season held in Colorado Springs, Colorado. The McMurry women’s team placed sixth with 165 points, while the McMurry men’s team brought home fourth with 280 points.

Senior Jerick Pena led the way for the War Hawks, achieving second and third place in the backstroke. Pena swam his best time of the season in the 100-yard backstroke, taking second place, recording a time of 54.96 seconds. He was third in the 200-yard backstroke, finishing with a time of 2:04.35, narrowly pulling ahead of fourth. Pena also took seventh in the 100-yard butterfly with a time of 54.76 seconds. The distance freestyle events were friendly to junior Dany Baki, who took seventh in the 500-yard free and fifth in the 1650-yard free. His 500- yard time was 5:33.83, while he completed the 1650- yard in 19:26.20.

Sophomore Kaitlynn Cozma and junior Jessica Gryder nearly set season bests in their respective events. Cozma swam a 2:46.40 time in the 200- yard backstroke preliminaries, less than half a second off the fastest time of her season. Gryder tied her second-fastest time of the year in the 50- yard freestyle in 27.39 seconds. In the 200- yard individual medley, senior Monica Flores placed 11th with a time of 2:34.16.

The War Hawks will be competing in their final swim event starting February 13 and going through February 16, in San Antonio for the SCAC Championship.

“We have really been putting in the hard yardage since the beginning of two-a-days and we know that it will all pay off in the long run. Our meet at Colorado College was challenging, especially since we just came off the two-a-days and since we were also in altitude, but we didn’t let that get to us!” said senior swimmer Monica Flores. “We showed up and competed well against Division Two schools and some of us even put up our best times of the season! We are really looking forward to some amazing swims at conference, and we know that everything we have trained for will finally pay off in our biggest and most exciting meet of the season!”

With Monica Flores and the rest of the swim team prepared for this upcoming meet, War Hawk fans should be excited for what the championship holds for the swim team.