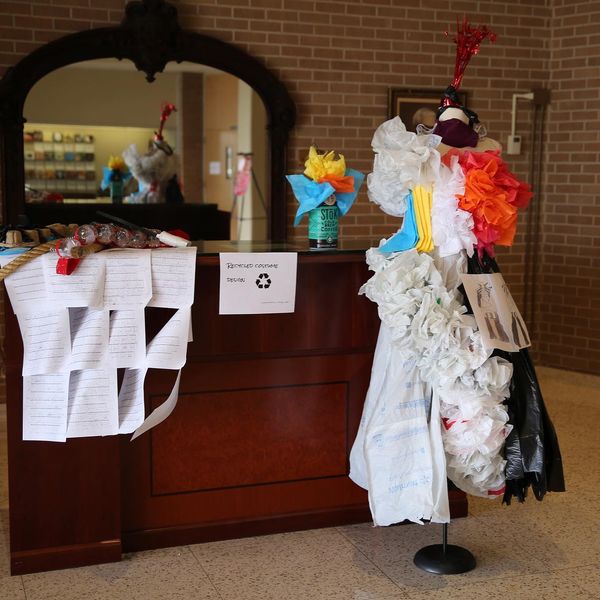 “Make sure you start gathering up your trash and recyclables,” said Neena McLain, a theatre professor at McMurry, “You’ll need them for your next project.”

Last Monday, Professor McLain assigned her students their most interesting project yet: making a costume out of garbage.

“As a designer you need to wrap your brain around shape and form,” said Professor McLain, “Sometimes you have to be willing to work outside the normal medium and transform strange materials into something new and creative.”

The class was separated into three groups: Bailee Walker, Savannah Wilchar, and Shanna Stubbs in Group A; Elmer Mejia, Erica DiGiacamo, and I in Group B; and Hailey Rodgers, Holly Kelly, Madi Melbourne, and Hayli Isbell in Group C. As an online student, Mackenzie Farias was assigned a solo project of creating a mask.

The project proved quite a challenge for us since we had little to no experience creating clothing, much less from such unorthodox resources.

“The most difficult part of making the costume was definitely assembling it onto the model [one of the students in our group],” Holly Kelly said, “Everything kept falling off!”

It was quite the spectacle during Friday’s class period. The floor of Group B’s workstation was littered in water bottles and caps, black and white garbage bags, crumpled cardboard boxes, and rainbows of old tissue paper as Erica frantically glued paper and plastic to our makeshift dress.

“It felt like we were in an episode of Project Runway!” said Elmer Mejia.

The stage was all a buzz with excitement and expectation as each group wondered what everyone else came up with that week.

Group A’s model donned a shiny wrapping paper skirt, pointed tin foil bodice and matching tiara. It was avant-garde and flashy enough for a pop star to perform in.

“We were inspired by celebrities like Lady Gaga and Katy Perry,” Group A’s Savannah Wilchar said, “It sort of evolved from there.”

As Group B’s model, I wore a paper dress with a bodice covered in rainbow tissue paper, a garbage bag skirt overlay, and a black garbage bag hair bow. I had to breathe very carefully in order to avoid ripping the delicate garment. We really captured the essence of a glamorous yet crafty princess ready to party.

While Groups A and B fashioned dresses and skirts out of their recyclables, Group C created an ensemble equipped for combat. Their model sported a gladiator-esque costume complete with a cloth whip, cardboard and soda bottle armor, and a t-shirt head wrap. The costume conveyed this character as a resourceful survivalist, using whatever they find on their journey as potential survival tools.

“When you’re designing you’re telling a story through the costume,” said Professor McLain, impressed with her students’ creativity, “I can’t wait to see what they come up with next.”