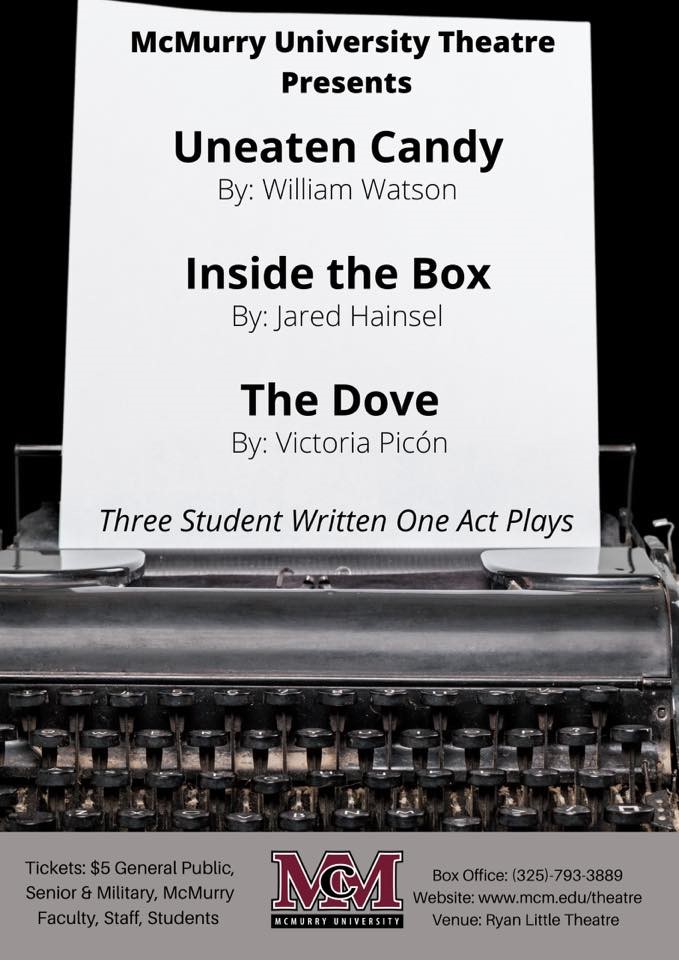 McMurry University’s Theatre Department is unique in the many opportunities it gives to its students in order to familiarize them with the outside world of theatre. Besides being a generalist theatre that goes out of its way to make sure that its students learn a little bit of everything they can from a variety of jobs throughout the department, there is also an opportunity for student written plays to actually be performed onstage.

McMurry’s playwriting class taught by former professor, Charlie Hukill, teaches its students everything one needs to know about constructing a play from scratch, but, in addition, three plays at the end of the semester are chosen to be performed the following year by McMurry’s Theatre Department. It is a wonderful opportunity for students to showcase their hard work as well as a great opportunity for the department to support its students.

The three plays chosen by Professor Hukill were written by three very different and unique individuals, and we’ll be looking into each of their creative processes as well as how they feel seeing their scripts become actual productions.

Theatre major Jared Hainsel is a sophomore who has been in several productions during his time here at McMurry with the most recent being the department’s latest production, Wait Until Dark. When asked about his inspiration for writing the play, Hainsel said, “ Life experiences to immortalize a part of my senior year of high school.”

The theme for Inside the Box  is “ ‘Never lose yourself’ and hold close the friends you can truly trust and care about because they will be there for you not just when you’re super happy and successful but also when you are at your lowest.”

As for his thoughts on seeing the production of his script into a play, Hainsel commented, “It’s scary, seeing my child grow and be put into the hands of other people. But it’s okay, it is a living thing now, I can’t control everything about it anymore so I gotta let it find its own way.”


Victoria Picón is another one of the theater students whose play will be performed later this March. Picón is a McMurry Junior with involvement in both the English and Theatre programs, as well as being a fellow writer for The War Hawk Herald.

When asked about her inspiration behind The Dove, Picon stated, “I kind of knew I wanted to tell a story about a dove. I’ve sung songs about doves before and have thought of them as beautiful creatures. They’re also symbols of peace and hope, and I wanted to invoke those ideas. I was also inspired by my Mexican heritage and incorporated some elements of Spanish into the script.”

As for the central theme of her play, she commented, “I would say it is the importance of having a purpose in life; you can’t find your purpose in other people. I also included the theme of using your God-given gifts to do good and to help others.”

Lastly, Picón revealed her thoughts on the current production of her script. “I am extremely excited and am so happy my play got to be chosen. I think Neena McLain casted the play perfectly. Seeing it come to life is almost uncanny because I envisioned certain scenes in a certain way but when they’re interpreted and staged by someone else it’s as if it becomes a different story.”

The remaining play Uneaten Candy is by McMurry English student, William Watson. Although Watson has no past with the theatre department, McMurry’s playwriting class is open to all who are interested, and the play that Watson wrote for the class ended up being chosen to be performed.

Not all theatre departments allow for the production of student written work to be performed, much less three different plays entirely, but it is this consideration for the students that make McMurry shine. The willingness to expend resources and shine a light onto student work is incredibly valuable to those involved. Being able to say that a play that you have written has been performed even once is an important detail that adds much credibility to one’s status as a playwright.